FLAMMABLE VS INFLAMMABLE A PROFOUND OPINION

English is a trickster of a language, evidenced by the fact that two words that appear to be antonyms can actually mean the exact same thing. For the most part we manage to bumble along without confusing the two, and can figure out which meaning is intended based on context (although in the case of regardless and irregardless some extra time is needed for teeth-gnashing). We know that inhabitable refers to a place that is habitable, and don’t feel any need to stop our conversation to point out the superfluous in- prefix.

However, every once in a while we come across a pair of words that it really would be better to not confuse. A fine example of this is flammable and inflammable.

Looking at similar words, it is clear that such matters could be very simple; after all, combustible means “capable of catching on fire and burning you to death” and incombustible means “this thing is safe to play with matches around” (more or less). Yet flammable and inflammable both mean “able to be set on fire.” Why in the world is this? Do the language gods have a cruel streak?

There is a fairly clear reason for why both these words carry the same meaning: the prefix in- does not always function as a negative prefix. Sometimes (and this is one of those times) it serves as an intensifier. It’s fairly obvious how this could lead to problems.

Surprisingly, both flammable and inflammable coexisted peacefully in English for hundreds of years before anyone decided to do something about it. Inflammable is the older of the two, with recorded use as far back as 1574. Flammable begins to appear in 1655, when Margaret Cavendish described oil as being “hot burning and flamable” in her Philosophical and Physical Opinions. One of the reasons there was little confusion about these words is that flammable was used much less often than inflammable.

But in the 1920s the eagle-eyed language guardians of the National Fire Protection Association (NFPA) realized that many people were viewing the in- in inflammable as a negative prefix, and were at risk of consequently incinerating themselves at a much higher rate than was desirable. The NFPA advocated to have flammable used exclusively for warning labels (such as are found on mattresses, oil cans, and other things that will catch on fire if you put a match to them), and managed to slightly nudge our language toward a more sensible path. Though in the recent past flammable is used more often than inflammable, this pair still incites controversy—and laughter. 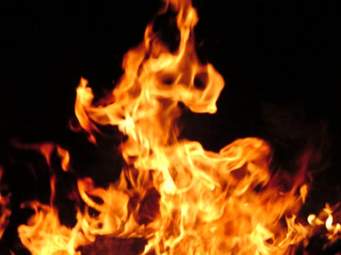