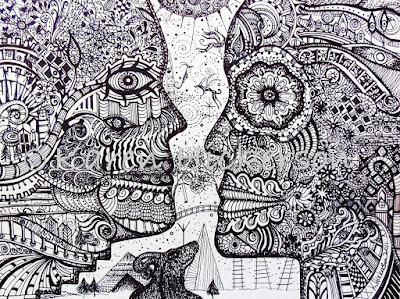 Our love is one made by the gods, I will love you till the end of time
- Michael James
The birds of the earth surface in the blue horizons ,often when the sky is that magnificent orange colour and the sun bends its head in a bowing gesture for the moon’s daily performance. The trees hum in that deep eerie way of theirs and sway as if in rhythm to the evening’s swishing breeze. Fatima would then come out to the death field where all the people who the world and fate decided were no longer relevant lay, to weep at his tombstone. Adedeji her one and only love.
He had loved her indeed he had, but he was feisty most of the time and seems to derive more pleasure from having sex with her than he did her company. He maltreated her and called her foolish but she loved him. It was perhaps one written in the stars because despite all his misgivings she never once conceived the thought of leaving him. He was all she had and all she needed and this alone gave her repose for many years

Adedeji had wooed her. He had not always been so demanding, so self centered and erratic. There had been a time when he bought her flowers, proclaimed his love for her and even bought her things but all that seemed to wither like the bright leaves on the apple tree during harmattan seasons. Their slight wander started when his drinking habits sufficed. Fatima had expressly told him that she despised it. That had been four years ago, two years after they had been married. They were not rich, nor were they poor.  Adedeji worked hard. She couldn’t deny that one fact. Sometimes they would fall back in their rent arrears because they didn’t have enough money to spare, then Adedji would go to borrow from his friends. He genuinely wanted to make her happy but his melancholic attitude and his profound shortcomings often got in the way.

There were many things Adedeji did to offend her, though now she wondered whether they were on purpose but he would never lie to her. In their difficulties Adedeji had borrowed money from a reputable money lender called Bola, she as a result always demanded his presence. Because Adedeji had no money to spare and he was in debt to her, he often had to oblige such calls. They however made Fatima very suspicious. Once he returned home very late and she noticed a lipstick smudge on his chest, she had questioned him vehemently as to how it came to be. He had answered dryly that he was yet to receive more humiliation in his life  and at that she flared up. It was not long after she started keeping late nights and coming home looking stressed out. Adedeji keep a bats eye at first, but after two months he called her and asked her what the problem was, she answered dryly that she was yet to receive more humiliation in her life. At that Adedeji stormed out of the house. He returned later that night when the bar beside Mary Ade Street just closed. He checked the doors and found them open, he couldn’t believe it. He started going upstairs to give Fatima a piece of his mind when he heard funny sounds. It sounded like Fatima moaning that way she did whenever they both went upstairs to perform their matrimonial duties, a masculine voice was as well grunting, he gently opened the door and saw Fatima stark naked with  a man he had no cognition of making love on their matrimonial bed.

He went to the living room and sat on the couch until the next day. When the man came down first he greeted him as though he were a visitor and even allowed him to eat before he left. Fatima on the other hand was too shocked with guilt to say anything. Adedeji went about his activities as though nothing happened and for many weeks they didn’t talk about it. It seemed to hover over the house like an unspoken truth waiting to be told but both parties were not yet ready. On the fourth week week he called her before he went to work , sat here down on the bed and told her they were to discuss when he returned, at that her heart started beating. Then he said that his mother was sick, and then she sighed in relief. Some minutes later he left. When he came back that evening he looked sober, and when she asked him what  the problem was and he told her that His mother had passed on. She wept bitterly but he just stared on without saying anything.  Adedeji then went upstairs to change and she went to set his meal. He heard voices, alarmed he ran down stairs and saw a man trying to rape his wife. He pounced on the man. The man had a knife but Adedeji did not know. When he had wrestled the man to the ground and stood up. The man quickly sat up and stabbed him from behind. Adedeji died painfully. Fatima watched his life bleed away as she kept screaming for help. The intruder had long escaped but there was little she could do. By the time people came, he had long died.

She stood there for what seemed like forever and when the moon had taken the dark stage properly, a tear fell off her cheeks and met the cement tombstone below. There was no telling what life would be from then onwards but she was certain. She would always love him.